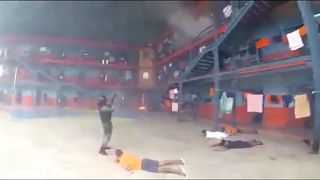 Ecuadorian Police from the special operations group entered the Turi penitentiary in Cuenca to attempt to control the riot on Tuesday.

Hundreds of police officers and military personnel converged on the prisons after apparently coordinated fights broke out in the maximum-security wings as rival gangs fought for leadership within the detention centers.

Authorities have said the clashes that began on Monday night were precipitated by a search for weapons carried out at the facilities in the South American nation.

The national agency responsible for the prisons said 37 inmates died in the Pacific coast city of Guayaquil, 34 in the southern city of Cuenca and eight in the central city of Latacunga. Some 70% of the country's prison population lives in the centers where the unrest occurred.

Deadly prison riots have happened relatively frequently in recent years in Ecuador, whose prisons were designed for 27,000 inmates but house about 38,000.