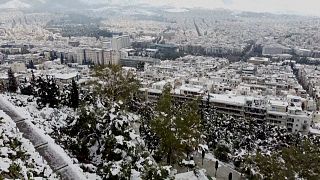 Drone footage captures the rare sight of snow in Athens

This drone footage shows the rare sight of snow in the Greek capital Athens.

The snowstorm, described by authorities as the most severe in 20 years, blanketed the city and its ancient monuments Tuesday and left parts of the capital without power and water.

Armed forces service members, including marines, were called in to help.