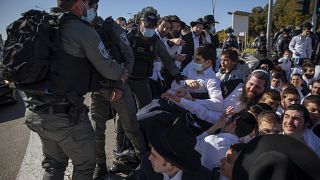 The clashes occurred in Ashdod and Jerusalem as police attempted to close religious schools that had opened in violation of lockdown orders.

Throughout the pandemic, many major ultra-Orthodox sects have flouted safety regulations, continuing to open schools, pray in synagogues and hold mass weddings and funerals.

This has contributed to a disproportionate infection rate, with the ultra-Orthodox community accounting for over one-third of Israel's coronavirus cases, despite making up just over 10% of the population.

In the coastal city of Ashdod, police scuffled with dozens of protesters outside an ultra-Orthodox school.

One demonstrator was seen removing his facemask before coughing at police.