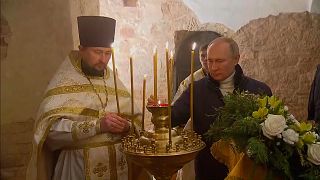 The Saint Nikolai Lipno Church lies on an island in the river delta near Veliky Novgorod, about 500 kilometres (300 miles) north-west of Moscow.

The small stone church is a UNESCO-listed heritage site.

The Russian Orthodox Church, like many other Orthodox churches, observes Christmas on January 7, with the main services starting late on Christmas Eve.

It held its main midnight Christmas service at Christ the Saviour Cathedral in Moscow, an elaborate ceremony with dozens of clerics led by church head Patriarch Kirill chanting and holding long candles while masked worshippers watched.