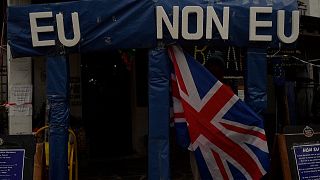 Britons living in Spain throw a "celebration-commiseration" to mark the end of the Brexit transition period.

Many of those present at the socially-distanced event in Jimera de Libar in Málaga province, Andalusia, voted to remain in the European Union and expressed their disappointment in leaving the 27-nation partnership.

As of January 1, UK citizens no longer have the automatic right to move to the EU to work and settle, and vice versa, and travel between Britain and the continent now involves new restrictions.