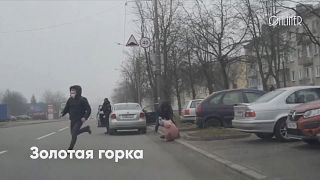 Dozens detained in Minsk as Belarusian protesters use new tactics

Around 100 people were detained in the Belarusian capital on Sunday during anti-government protests.

Demonstrations broke out after the re-election of the country’s authoritarian leader and have raged for over four months.

Crowds of people took part in dozens of small rallies scattered around Minsk — a new tactic used by the opposition.

Instead of one large gathering, it is intended to make it harder for security forces to target the protesters.

Demonstrators carrying red-and-white flags, the symbol of the protest movement, gathered in groups and marched down residential areas of the city, demanding the resignation of President Alexander Lukashenko and protesting his government's violent crackdown on activists and peaceful demonstrators.

Police in Minsk said around 100 protesters have been detained but the Viasna Human Rights Centre released the names of nearly 150 people detained in Minsk and other cities, where rallies also took place.

Two journalists were detained in the western city of Grodno, according to the Belarusian Association of Journalists.

Mass protests have swept Belarus, an ex-Soviet nation of 9.5 million people, ever since official results from the August 9 presidential election gave Lukashenko a landslide victory over his widely popular opponent, Sviatlana Tsikhanouskaya.

She and her supporters refused to recognise the result, saying the vote was riddled with fraud.

Authorities have cracked down hard on the largely peaceful demonstrations, the biggest of which attracted up to 200,000 people.

According to human rights advocates, more than 30,000 people have been detained since the protests began in August, and thousands of them were brutally beaten.

Four people are reported to have died as the result of the government's crackdown on demonstrators and opposition supporters.