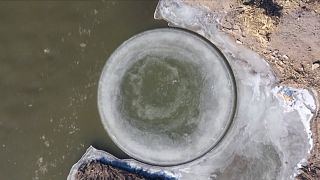 A large rotating ice disc has been spotted floating in a river in northern China.

The rare natural phenomenon, which is caused when ice discs form on the outer bends in a river where the accelerating water creates a force called "rotational shear", breaking off a chunk of ice and twisting it around.

As the disc rotates, it grinds against surrounding ice, smoothing its form into a circular shape.

On Wednesday, surprised local residents in the Inner Mongolia Autonomous Region discovered the rarity, which was rotating on the surface of the Taoer River running through the city

The steadily rotating ice disc was in a perfectly round shape and looked like a giant jade pendant.

"It's so fantastic. I never saw ice like this before," said a resident who lives near the river.

The phenomena have been spotted in a few other extremely cold areas, like Canada and the North Pole.