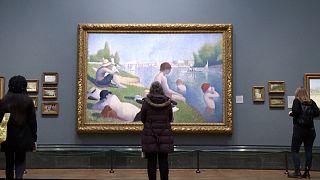 Cultural venues in England were able to finally reopen their doors after the country exited a month-long lockdown on Wednesday.

Cultural venues in England were able to finally reopen their doors after the country exited a month-long lockdown on Wednesday.

Most of the country remains under restrictions as a new regional tiered system for cutting coronavirus infection rates kicked in.

The four-week lockdown, which began in November, was imposed to stop surging rates of infection, ease pressure on health services, and to allow families to gather for Christmas.

But a tough three-tier system of restrictions will now be put in place, something that has been criticised as doing little to reinstate cherished freedoms and help the virus-battered economy.

Most of England's 55 million people will go straight into level two or three, depending on local infection rates, limiting household mixing and the reopening of the hospitality sector.

Just one per cent of the country - the southwest county of Cornwall, the far-flung Isles of Scilly off its coast, and the Isle of Wight in the south - are at the less restrictive level one.

Prime minister Boris Johnson, who himself had COVID-19, succeeded in winning a vote on the measures in parliament on Tuesday night, despite opposition from within his own Conservative party ranks.

Only a coronavirus vaccine, including one developed by British drug firm AstraZeneca and Oxford University, and mass testing would allow life to get back to normal, he said.

Johnson and his ministers are banking on the arrival of a coronavirus vaccine and rapid countrywide community testing as a way of returning to normality from early 2021.

Across England, non-essential shops in Tier 2 are allowed to reopen, hoping to improve a dismal year with bumper sales in the run-up to Christmas - traditionally a money-spinner.

Mixing of households outside support bubbles remains banned under the guidelines, although individuals can meet in groups of six outside.

The capital and driving force of the UK economy, London, is in Tier 2, meaning pubs where food is served and restaurants can reopen, obeying social distancing rules.

But in Tier 3 areas, which covers some 23 million people and includes Britain's second city Birmingham, hospitality venues will remain closed except for takeaways.

The restrictions have prompted fresh concerns for the economy, which finance minister Rishi Sunak said is facing a 11.3 percent contraction this year - the worst in 300 years.

Those fears were stoked further this week by the collapse of retail group Arcadia, which owns popular high-street stores Topshop and Burton, and the Debenhams chain.

Both went into administration, blaming the impact of coronavirus restrictions on trade that was already under pressure from online competitors.

Most virus fatalities in Europe

The main opposition Labour Party chose to abstain from the Tuesday vote, criticising the government for failing to offer more financial support to the beleaguered hospitality sector.

Last month, a survey for pub and restaurant industry bodies suggested almost three-quarters of UK hospitality venues would be forced to shut in 2021 without more government help.

Britain has recorded the highest number of fatalities in Europe in the pandemic with more than 59,000 deaths from some 1.65 million cases.

An Imperial College London study this week indicated the month-long shutdown helped push the number of cases down by nearly a third, raising hopes of less stringent measures.

The government has announced plans for a Christmas reprieve, with three households allowed to gather indoors from December 23 to 27.

The tiered system - a different approach from the three other nations in the UK, Scotland, Wales and Northern Ireland, whose devolved administrations set their own health policy - will be reviewed every two weeks.

The first assessment is due on December 16, but the government has said a further relaxation of restrictions before Christmas is unlikely.