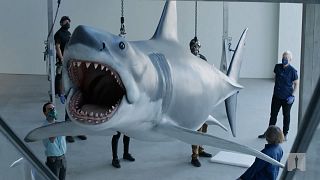 Bruce, the fibreglass shark made from the Jaws mould, is hoisted into position at the new Academy Museum of Motion Pictures in Los Angeles, which is set to open its doors to the public on April 30 next year.

The shark is a replica and did not feature in Steven Spielberg's classic 1975 film Jaws.

The three mechanical Great Whites used in the movie were destroyed when production ended. But once the film proved to be a box office phenomenon, a fourth shark was made from the original mould.

For 15 years it hung at Universal Studios Hollywood as a photo opportunity for visitors, before ending up at a scrapyard. But when Nathan Adlan inherited his father's junkyard business, he donated Bruce to the museum.