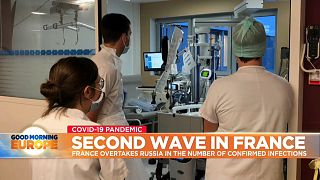 Stress and personnel shortages: warnings from the medical frontline

The Rhone Alpes-Auvergne region which includes France's second city Lyon is now the most affected part of the country. Euronews had access to an intensive care unit in the city, where workers spoke up about their fears and the day to day challenges.

Some admitted the system is clearly struggling with the second wave. This combined with the harsh winter months ahead raises the alarm on the mental health of medical workers who are already having to deal with shortages in personnel.

Watch Euronews's full report on Europe's second wave and medical workers concerns in the player above.