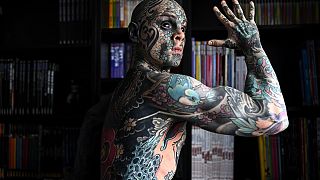 He is thought to be the most tattooed man in France.

Sylvain, 35, a schoolteacher in Essonne, south of Paris, has spent nearly €60,000 having his body covered in designs.

He has tattoos on his face and skull. He even has black ink in the whites of his eyes.

"It’s torture, you’re keeping your eye wide open, you can feel the needle piercing it,” said Sylvain. "We don't know if it's going to be okay. That's why I tell people: 'don't do it'. But I felt like I was incomplete."

He insists the tattoos are not an issue for the children he teaches, who range in age from six to 11.

"I always cause a moment of amazement in the children and the parents. But when I introduce myself and they see that I am a teacher like the others, everything goes well," he said.

"The children who see me learn tolerance and respect for others. When they are adults there may be more chance that they are not racist, homophobic."