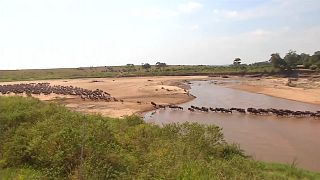 It's one of the seven wonders of the world — the annual migration of thousands of wildebeest from the Serengeti National Park in Tanzania to the Maasai Mara National Reserve in Kenya.

It's a breathtaking sight that draws tourists from across the world.

But this year, few are witnessing the spectacle, as the coronavirus outbreak grounds flights and halts global tourism.

Milton Siloma, a 53-year-old tour guide and driver, has been working in Kenya's Maasai Mara National Reserve for three decades.

"Like today, we are just alone in a spot like this — and this is all happening because the COVID(-19) has really affected us, whereby being in July, we are supposed to have thousands and thousands of tourists around watching this phenomenon," he says.

The Maasai Mara Game Reserve is a source of income for many, including the local government.

The county government collects revenue from the park, which is raised through entry fees, balloon rides and other activities but with the pandemic, there's now little revenue to be collected.

Chief warden James Sindiyo says the county's collection has been reduced to nothing.

"COVID(-19) has really affected so many operations for us here in the reserve in the sense that the revenue, the funds, that the county government was collecting from Maasai Mara National Reserve has gone to zero," he says.

"We get much of our revenue from the park entry fees, and other sources like the balloon safaris, balloon tariffs, even from the lodge rents, and all that has gone down."

Many depend on income from tourists, who visit to buy souvenirs and watch traditional performances.

With no income from tourism and livestock markets closed, food supplies are now running low.

"We depend on visitors, but for now, because the tourists are blocked from travelling, we are having a lot of difficulties," says Kadele Kasare, a Maasai living next to the game reserve.

"The biggest problem is food, we are not getting enough food and at a time when there is no money from the tourists, we sell our cows, livestock, but now even the market has been closed. So, we are facing a lot of difficulties."

Desperation is forcing some local communities surrounding the reserve to illegally hunt for bushmeat.

Chief warden James Sindiyo says it is not commercial operations partaking in this activity but groups hunting to feed themselves.

"The surrounding communities, when they are desperate, then they can do anything to hunt and we have been getting such kinds of cases of bushmeat, especially bushmeat trade, and we have arrested quite a number," he says.

Wardens fear a larger problem could be on the horizon — they believe it's only a matter of time before commercial poachers try to take advantage of the situation.

According to a Johns Hopkins University tally, Kenya has reported around 20,000 confirmed COVID-19 cases and 325 deaths.