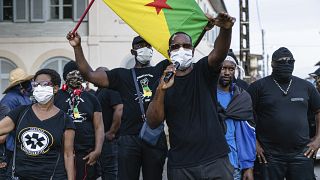 Nearly 7,000 coronavirus tests have come back positive in French Guiana, and it has quickly become the fastest-growing outbreak on French soil.

The South American territory of about 300,000 people now accounts for about a quarter of new infections within France's health system.

But unlike hospitals on the French mainland, which quickly received emergency aid during the height of the coronavirus crisis, French Guiana's outbreak has exposed deep economic and racial inequalities that residents say leaders in Paris have long chosen to ignore.

"We are suffering from a health crisis," French MP Gabriel Serville, who represents French Guiana, told a Senate hearing Monday. "What has been done, it has been done too late."

In recent weeks, hospitals have become overrun by coronavirus cases. Beds in intensive care units are hard to find and there has long been an insufficient supply of doctors in the territory.

"The Cayenne hospital centre is now faced with an ever-increasing influx of patients" said Christophe Robert, director of the Andrée Rosemon Hospital in Cayenne. " [We] reorganise on a daily basis in order to adapt the number of beds able to accommodate COVID-19 patients."

Patients suffering severe cases, but are well enough to be transported, have been evacuated by flight to nearby French islands in the Caribbean.

The overseas territory is technically equal to any other French department, such as Provence, Calais or Isère. But residents say the health system is not on par with that in the mainland.

There are only 55 general practitioners for every 100,000 people in French Guiana, compared to an average of 104 across mainland France.

Hospitals, which are concentrated in the capital city of Cayenne, often lack the capacity to perform many medical operations quickly.

Thousands demanded upgrades to the health system during 2017 protests. Leaders in Paris promised a new hospital, hundreds of more doctors, and 40 billion euros in funding.

So far, Paris has only delivered on the funding promise.

France’s new Prime Minister, Jean Castex, visited Cayenne in early July for a visit to ensure "the solidarity and total commitment of the Republic."

Castex referred to the territory, which borders Brazil and Suriname, as an "island" -- giving many locals the impression that he was out of touch.

At the end of his visit, the French PM agreed to provide French Guiana with "the necessary resources."

The national government has sent 130 reserve health care workers to French Guiana and promised that more are on their way.

During Monday's senate inquiry into the health crisis in French Guiana, protestors gathered outside the Cayenne prefecture to demand more resources for health services.

Pallets and tyres were set on fire, prompting criticism from local leaders.

"We were on the brink of widespread fire at the prefecture" local prefet Marc Del Grande told AFP. "It is an unacceptable act which could have had extremely serious consequences for a public building whose construction began in 1729 and which is part of the Guianese heritage"

Case numbers were low at the time, but health officials feared that living conditions and a high poverty rate could make the territory vulnerable to an outbreak.

An estimated 10 per cent of households don't have access to running water.

Health officials believe many cases have come over the border from neighbouring Brazil, where the virus has quickly spread across the country.