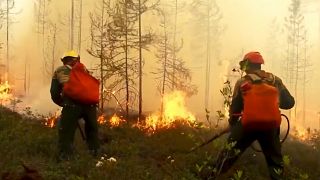 Forest fires continued to burn out of control in Russia's Arctic region on Thursday.

Strong winds are helping to spread the flames in Sakha Republic, north-east Russia.

More than 2,000 hectares of forest was on fire, according to Russia's Ministry of Emergency Situations.

Thick smoke has reached Yakutsk, Sakha's capital, which is 400 kilometres from the epicentre of the blazes.

A state of emergency has been declared, according to the government of the Sakha Republic.