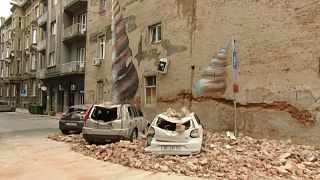 A 5.3 magnitude earthquake struck a wide area north of the capital Zagreb at 6:23 a.m. (5:23 GMT) on Sunday, the European seismological agency EMSC said.

The epicenter was 7 kilometers (4 miles) north of Zagreb at a depth of 10 kilometers (6 miles).

Zagreb's emblematic cathedral suffered damage. The top of one of its two needles collapsed. The cathedral was rebuilt after it fell during another earthquake in 1880.

Many buildings in the city suffered damage to walls and roofs.

The downtown streets were littered with rubble as concrete slabs fell on cars.

Power lines was cut and people were left homeless. Several fires were also reported, and at least two other tremors were recorded later in the day.