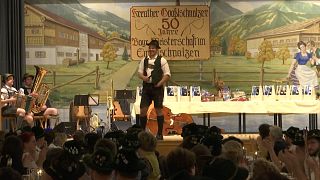 Whip it! A cracking tradition comes alive at Bavarian contest

Whipcracking — "Goaßlschnalzen" — is a Bavarian tradition that goes back to coachmen who used to announce their arrival in a village with their whip.

In today's competitions, the challenge is to pound the whip in rhythm, as music became an integral part of whipcracking in the 1970s, when organised championships began in Bavaria.