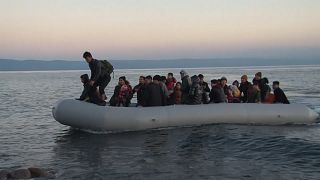 Migrants arrive on Lesbos with others blocked at land border

While thousands of migrants have been blocked at Turkey's land border with Greece, others have been getting into the country by sea.

They have continued arriving on the island of Lesbos, despite warnings by Greece's prime minister that they would be turned back.

A dinghy carrying 47 people — who said they were from Afghanistan — landed on the island's shores and setting up camp on a beach.