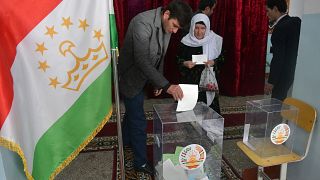 Voters took to the polls in Tajikistan on Sunday in a parliamentary election that the ruling party of President Emomali Rakhmon is expected to dominate.

The elections are the first in the country's post-Soviet history without the Islamic Renaissance Party of Tajikistan, a faith-based party that was outlawed in 2015.

Many of the competing parties are seen as ones that will endorse the president who has been in power for nearly three decades.

Only one identifiable opposition party will compete, the Social Democratic Party of Tajikistan, which has never entered parliament. The president's party, meanwhile, holds 51 seats out of 63 in the lower parliament.

Mukhabbat Rakhimova, a teacher in the capital Dushanbe, said it was symbolic that she was casting her vote in a school that had been converted into a polling station.

"I want the lawmakers we elect to make their own big contributions to education," Rakhimova told AFP.

The last elections in 2015 marked a turning point for Tajikistan, a landlocked Muslim-majority country reliant on Russia for security and China for loans and investment.

Long regarded as the poorest country in the ex-Soviet Union, Tajikistan has seen its poverty rate decline over the last two decades to around 29% in 2017.

Hundreds of thousands of the 4.7 million electorates live and work in Russia, where polling stations will be set up at the country's embassy in Moscow and consulate in Saint Petersburg.