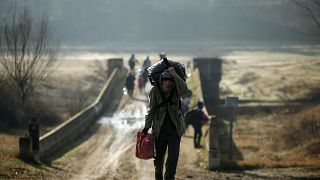 Migrants clashed with Greek police after Turkey officially declared its western borders open to those hoping to head into the European Union.

Police were seen patrolling the Greek border as dozens of migrants lit fires and threw rocks, waiting at the border.

Greek authorities fired tear gas and stun grenades to prevent attempts by the crowds to cross the border repeatedly.

At least 13,000 migrants gathered along the border, the International Organisation of Migration said.

Turkey's decision to open the borders with Greece came amid a military escalation in Syria's northwest that has led to growing direct clashes between Turkish and Syrian forces.