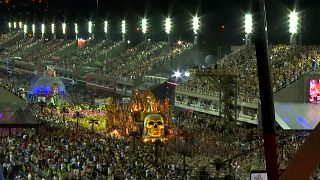 The samba parade marked the first of a two-night competition in which dancers, musicians and artists gather at the Marquês de Sapucai Sambadrome to show the judges, the public and the global television public what each samba school has to offer.

The parade, which began with the national anthem, is more than a dance competition — it is also used to highlight important social problems in Brazil, such as religious intolerance, racism and violence.

Each of the samba schools was judged in 10 categories, from the quality of their drummers to the beauty of their costumes and floats.

The largest carnival in the world officially ends on Ash Wednesday, which marks the beginning of the Christian period of Lent.