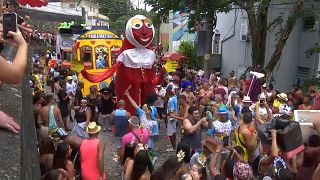 Thousands of revellers attended the Carmelitas street party during the first day of the Rio Carnival on Friday.

The traditional "bloco", as the carnival parties are called in Brazil, took the streets of Santa Teresa neighbourhood where foreigners and Brazilians wearing costumes danced, played music and enjoy one of the country's most important parties.

For 30 years the Carmelitas bloco has paraded through the streets of Santa Teresa neighbourhood with revellers and musicians dressed as nuns and priests.