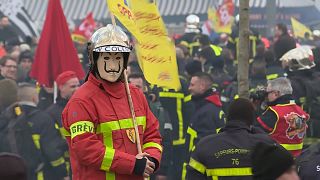 This is the second national demonstration by firefighters in the French capital in fewer than four months.

They were demanding a 28% increase in bonuses they say they should be paid to compensate them for the risks they take in the job.

Their bonus is currently 19% of their salary but the firefighters want a "single rate of 28% for all professional firefighters".

Some clashes were reported near Place de la République, and the police had to use tear gas to disperse the protesters.

Later in the day, firefighter unions stopped their industrial action after concessions by the French interior ministry.