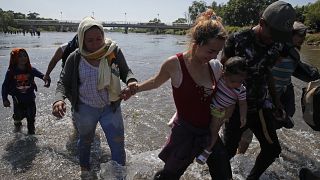 Mexico stepped up its police presence, with hundreds of National Guard troops deployed to the bridge and the banks of shallow Suchiate River that divides the country from Guatemala.

The migrants demanded they be allowed to move freely through Mexico to reach the United States - something Mexican officials have refused.

Migrants said if they weren't allowed over the bridge, they would wade through the river - a potential danger gave the hundreds of children travelling with the group.

Trump has forced asylum seekers to remain in Mexico or apply in Central American countries, effectively removing one of the escape valves for previous caravans.

Monday's standoff was a contrast to Saturday when Mexican troops scuffled with some migrants and slammed the gate shut as hundreds of others pressed forward in an effort to start new lives in the United States.