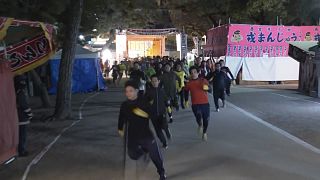 The race is held on the morning of January 10 every year at Nishinomiya Shrine in Hyogo Prefecture. The shrine is dedicated to Ebisu, the god of prosperity.

About 5,000 people were waiting outside the shrine before dawn on Friday. When the gate opened to the sound of drums at 6 a.m., competitors dashed to the main hall, roughly 230 meters away, to become the first "luckiest man" of the Reiwa era.

The runners who came second and third were also crowned "lucky men."

The winner said he was surprised by his achievement. He added that he is looking forward to a successful year and hopes to share his good luck with other people.