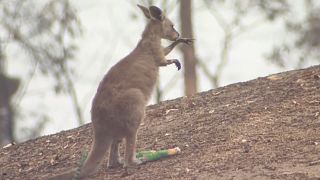 Carcasses of kangaroos were littering the sides of roadways along with other animals.

Rae Harvey of Wild2Free lost her kangaroo sanctuary which she had built over 16 years.

When the fires hit the sanctuary on New Year's eve, Rae was evacuated by boat with help from a volunteer firefighter.

Dozens of kangaroos are feared dead, and since the fires about 22 kangaroos have returned to the sanctuary, with some having serious burns, AuBC reported.

The lack of medical supplies has also been impacting the work that can be done to help the remaining animals.

The fires, fuelled by drought and the country's hottest and driest year on record, have been raging since September, months earlier than is typical for Australia's annual wildfire season.