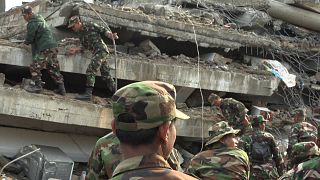 By Saturday morning, 18 people had been rescued, injured but alive, and crowds watched in the afternoon as two more were pulled out and rushed to ambulances more than 20 hours after the accident.

The website of the National Police reported that the Cambodian couple who owned the property and hired the construction workers were detained by provincial police for questioning on Saturday.

Nguon Samet, deputy police chief of Kep province, said Saturday morning that it was believed some people were still trapped under rubble, but he could not say how many.

Relatives of some of those still missing gathered outside the site to pray, he said.

Nguon Samet had said that the seven-story building apparently collapsed Friday when concrete was being poured on its top level.

Kep provincial authorities announced that a committee had been formed to officially investigate the cause of the accident.