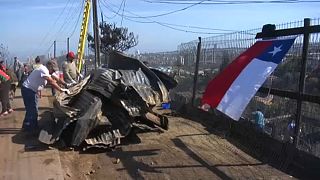 Helicopters on Wednesday dropped water on the outskirts of the Chilean port city of Valparaiso to extinguish a fire that destroyed about 150 homes.

Dozens of people sifted through the ruins of their homes after the fire, fanned by strong winds, swept through their neighbourhoods on Cht.

Residents had been evacuated and there were no reports of casualties.

Interior Minister Gonzalo Blumel said it appeared the blaze had been started deliberately.