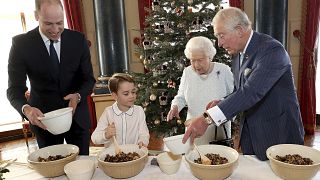 Queen and her heirs bake festive treats together

The footage was filmed earlier this month in the Music Room at Buckingham Palace.

The royals were in front of a very regal Christmas tree, adorned with decorations of crowns, a soldier in a Scottish kilt and miniature versions of a corgi, the queen's favourite dog breed.

The festive baking session was filmed as part of the launch of The Royal British Legion's Together at Christmas initiative.