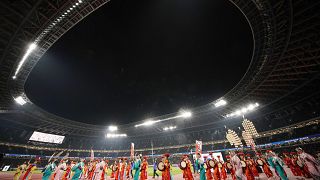 Usain Bolt may not be competing at the Tokyo 2020 Olympics but he took a star turn Saturday in the inauguration of the new National Stadium, seven months before the Opening Ceremony.

The retired Jamaican sprint superstar jogged 200 metres around the track in an exhibition relay race alongside paralympic athletes, in the first public event at the 60,000-seater stadium.

But the biggest cheers of the night were reserved not for Bolt, but J-pop boy band Arashi and Japanese rugby captain Michael Leitch.

"It was a great experience being here running in front of so many people... I was happy because I won't be getting to compete in the Olympics," Bolt told reporters afterwards.

He roundly rejected any thoughts of a comeback, saying: "Am I coming back to running? No."

"I'm actually in pain right now from the little run I did," he joked, adding that he was looking forward to attending the Games as a fan for the first time.

The stadium, designed by renowned architect Kengo Kuma, incorporates traditional Japanese design plus a host of features to beat the expected sweltering heat during the Games at the height of the Tokyo summer.

There is greenery to provide shade and the eaves around the outer perimeter are designed to keep out sunlight and rain and help channel breezes into the stadium.

The stadium, built on the ground of the 1964 Olympic Stadium, will play host to the opening and closing ceremonies, as well as the flagship athletic events.

However, it will not see the climax of the marathon, after the traditional closing event was moved hundreds of kilometres north to Sapporo on the northern island of Hokkaido, in a bid to beat the heat.

Total construction costs including design and supervising fees came to 156.9 billion yen ($1.45 billion), within budget, according to officials.

However, a previous design by late Iraqi-British architect Zaha Hadid was scrapped in 2016 as the costs had soared beyond $2 billion -- causing humiliation to the organisers.

The first competitive sports event at the new stadium will be the Emperor's Cup football final on New Year's Day.