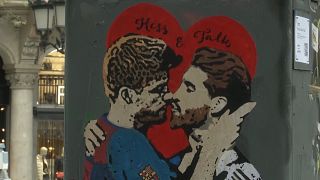 The graffiti appeared as the two sides prepared to meet at Barcelona's Nou Camp stadium in one of the world's most intense and bitterly contested sporting clashes.

But amid all the gadgetry this year, the expo's theme is clear: making robots that will help humans bridge the pathway to a "friendlier society."

It's equipped with state-of-the-art sensing equipment which allows it to detect the movements of the human player, their paddle, and the ping pong ball simultaneously. It does all this at high speeds, and with a high degree of accuracy.