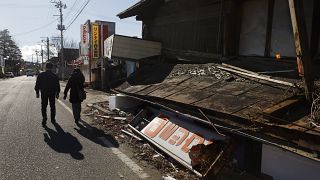 The torch relay for the 2020 Tokyo Olympics will kick off in Fukushima, the northern prefecture devastated almost nine years ago by an earthquake, tsunami and the subsequent meltdown of three nuclear reactors.

But some parts of the prefecture remain deserted as tens of thousands remain displaced by nuclear radiation.

Futaba is the only one of 12 radiation-hit towns that remains a virtual no-go zone. Only daytime visits are allowed for decontamination and reconstruction work, or for former residents to check on their abandoned homes.

The town has been largely decontaminated and visitors can go almost anywhere without putting on hazmat suits, though they must carry personal dosimeters — which measure radiation absorbed by the body — and surgical masks are recommended. The main train station is set to reopen in March, but residents won't be allowed to return until 2022.