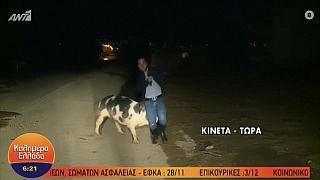 This is the moment a pig tried to hog the limelight by crashing a television journalist's live broadcast in Greece.

Lazos Mantikos, from channel Antenna TV, was reporting on flooding from the town of Kineta, west of the capital Athens.

The footage shows the pig chasing the journalist and trying to bite him as he spoke with colleagues in the studio.

"We have an issue here," shouted the journalist to the presenters, "There is a pig here and he has been chasing us all day," he said to the laughing presenters as the pig nipped at his trousers.

"I can't sit still because it is biting me!" he shouted as he tried to dodge the pig live on air.