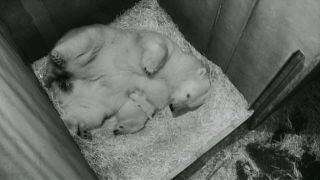 The newborn, which still has no name, was one of a twin to arrive at Schoenbrunn Zoo on Saturday, 9 November.

The second cub died on the same day.

The mother, Nora, has been separated from father Ranzo because male polar bears can be a danger to puppies.

The last time polar bears were born at the zoo was in 2011.