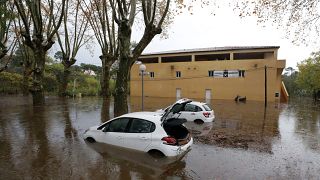 One person was found dead near Muy, between the towns of Nice and Marseille, the police prefecture of the Var department said in a statement.

The statement did not say whether that was the person it had earlier reported as missing after falling off a rescue boat near Muy late on November 23.

Another body was found in a car in Cabasse, a village nearby, it added.

Earlier, the prefecture said a 77-year old man was also missing since Saturday morning in Saint-Antonin-du-Var.

Several rivers burst their banks in southeastern France, causing major damage as homes were flooded and trees, cars and boats were swept along by the waters.