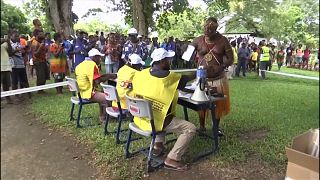 The people of Bougainville, a group of islands in the heart of the Pacific Ocean, began voting on Saturday in a historic referendum to decide if they want to become the world’s newest nation by gaining independence from Papua New Guinea.

The poll runs over two weeks and is a key part of a 2001 peace agreement that ended a brutal civil war in which at least 15,000 people died in the islands.

The president of the autonomous Bougainville government, John Momis, cast his ballot on Saturday.

Just over 200,000 people are eligible to vote in the referendum, with the results due to be announced in mid-December.

However, the vote will not be the final word. The referendum is non binding, and a vote for independence would then need to be negotiated by leaders from both Bougainville and Papua New Guinea.

The war triggered by disputes over the now-closed Panguna gold and copper mine, once run by a forerunner of the giant Rio Tinto mine, and anger over royalties from land and rivers polluted by mining.

Gianluca Rampolla, the United Nations resident coordinator in Papua New Guinea, said the world body has been working hard to ensure the vote is peaceful, transparent, inclusive and credible. He said there are 40 U.N. staffers on the ground and more than 100 international observers.

Rampolla said he thought it unlikely there would be violence during voting. “They’ve been waiting 19 years for this historic moment,” he said. “I think they will be left with joy.”