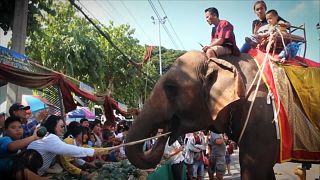 A special festival celebrating the relationship between humans and elephants has been taking place in Thailand.

It's been held in the south-east province of Surin since the 1960s.

The jumbos then fed on 50 tonnes of fruit on a 400-metre-long table.

Over 160 elephants will put on performances in the Elephant Round-Up shows this weekend along with over 1,000 performers at Surin Elephant Show Stadium.