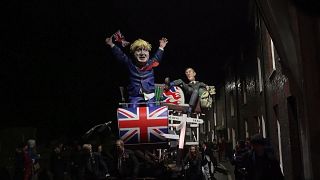 The costumed processions and bonfires mark the uncovering of Guy Fawkes' "Gunpowder Plot" to blow up the Houses of Parliament in 1605, and commemorates the memory of Lewes seventeen Protestant martyrs.

Britain traditionally celebrates Fawkes' failed attempt by letting off fireworks and lighting bonfires.Boris Johnson riding a Brexit rollercoaster with Jacob Rees-Mogg was among the effigies paraded through the streets at Lewes Bonfire Night on Tuesday (November 5).

The structure depicting the British Prime Minister and Leader of the House of Commons was one of several effigies - including Neptune, the Roman God of the sea and a Pope - expected to be burned later on in the evening.