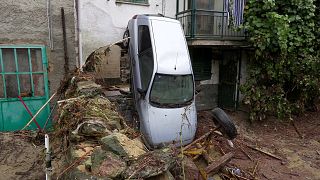 Residents of Castelletto d'Orba, in Italy's north-west, woke up to havoc and destruction on Tuesday (October 22) after heavy rains caused the Rio Albara, normally a tiny stream, to burst its banks and flood the small town.

Upturned cars and debris could be seen in the streets as residents and rescue workers used spades to sweep the mud away.

Elsewhere in the northern Piemonte region, the bad weather caused the death of one man as his car was washed away in a flood, according to La Repubblica daily newspaper.