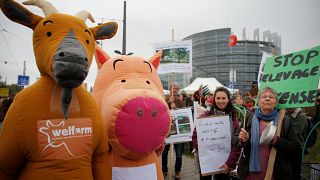 Hundreds of farmers joined forces on Tuesday (October 22) at a protest in front of the European Parliament in Strasbourg to call for a fairer and more sustainable agriculture.

Some of the roughly 500 farmers, mostly French with some from nearby Germany, drove tractors to the site, with some tapping pots and pans to call for farming measures to be promoted that respect the environment.

The Strasbourg demonstration took place as farmers elsewhere in the country took part in a series of protests against low profits, a perceived anti-farming bias and free trade agreements, including the Canada-EU trade deal (CETA).

The demonstration marks the end of a month of Europe-wide protests against the CAP’s current text. Last year, numerous actions had already taken place in 19 member states and a petition with 114,000 signatures had been handed over to the agriculture ministers of the EU.

The alliance also demands that livestock farming be species-appropriate and in smaller herds and that more funds to protect arable lands and restrict pesticide use be unlocked.