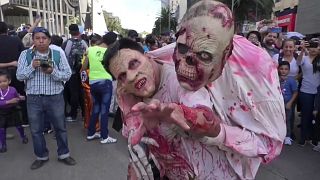 A vast crowd of ghoulish zombies descended on the streets of Mexico City on Saturday (October 19) for the city's annual Zombie Walk.

Wearing frightening costumes and elaborate make-up, the horde of undead gathered at Mexico City's iconic Monument to the Revolution and ambled down nearby streets.

Entire families participate in the event annually, with children often dressed up in costume.

The Zombie Walk phenomenon began in Sacramento, California in 2001. Since then, the event has spread to major cities around the world including New York, Buenos Aires, Bogota, Singapore, Sao Paulo and Frankfurt.