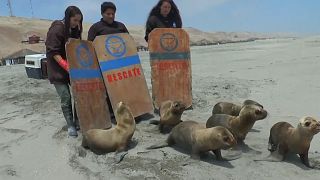 The Organization for Research and Conservation of Aquatic Animals on Saturday returned six young sea lions to the ocean.

Five male sea lions and one female, all weighing between 19 and 22 kilos (42 and 29 pounds) and measuring about 1 meter, were released by members of the nonprofit group at Wakama Beach, where they used their flippers to quickly make their way to the water.

Carlos Yaipen, director of ORCA in Peru, said that the latest group of sea lions joined more than 200 others that have been rehabilitated by the organization, which attends to hundreds of animal emergencies throughout the country.

The sea lions, which were given the names Pisco, Toto, Wilee, Marco, Alberto, and Delilah, were all rescued from precarious situations near the capital, Lima.

One was found in the garden of a beach house villa while two others were picked up while walking along streets far from a beach.

The female sea lion had sought shelter at a yacht club when she was hit in the waters near Peru's Santa María beach.

Each of the mammals had lost their mothers and were struggling to survive on their own.

The organization said that it gave the sea lions medical attention, intensive care and emotional support and retaught them how to eat and fish.