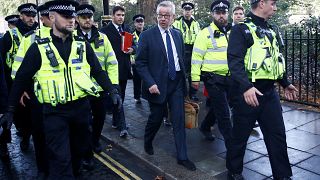 The leader of the House of Commons Jacob Rees-Mogg and other ministers were heckled by anti-Brexit protesters as they left parliament on Saturday.

The ministers were leaving after an extraordinary sitting of parliament in which lawmakers were supposed to frame the approval of Prime Minister Boris Johnson's EU divorce deal. However, lawmakers passed an amendment that removes any chance of a no-deal Brexit by deferring a decision on the agreement.

Anti-Brexit protesters outside parliament shouted "Shame on you" as Rees-Mogg, Brexit planning minister Michael Gove and Minister of State for Business Andrea Leadsom left the House of Commons.