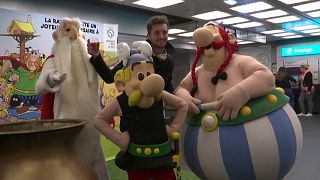 The Paris Metro has temporarily renamed 12 subway stations in honour of Asterix the Gaul to mark the comic book series' 60th anniversary.

Characters Asterix, Obelix, and Getafix also made an appearance to pose for photos with fans in Gare de Lyon station - renamed "Gare de Lugdunum" - to match the comic's Roman-era setting.

Since it was first published in 1959, Asterix has become a mainstay in the publishing industry with more than 370 million albums sold worldwide.

As well as being translated into more than 100 languages, the books have inspired a dozen movies and cartoon series.

The original books, written by Rene Goscinny and illustrated by Albert Uderzo, built up a mass following in the 1960s and 70s, with many readers from those days still snapping up the titles half a century on.

After Goscinny's death in 1977, Uderzo both wrote and illustrated the series until he retired in 2009.