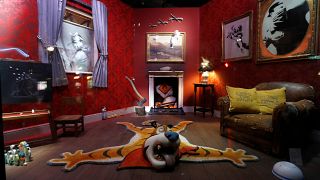 The exhibition, which includes the Union Jack stab-proof vest he designed for British rapper Stormzy, appeared in the early hours of the morning on Church Street.

The 'showroom' entitled 'Gross Domestic Product - where art irritates life' will run for two weeks and is for display purposes only. All of the work will be sold online once the website is launched, a sign indicates.

Banksy said they were forced to set up his own range of branded merchandise to protect the name 'Banksy', following a greetings card company attempted to seize the name's legal custody, according to a sign at the exhibition.

A 'Tony the Tiger' rug, snarling his decayed teeth, is designed to be a "conversation piece - especially if the conversation centres around the UK spending over £7.8 million a year on tooth extractions for the under 5's", a sign indicates.

Other installations include a 'Met Ball' home entertainment lighting system made from a mirrored police riot helmet and a 'Baby Mobile', a crib flanked by security cameras, designed to 'prepare your baby for a lifetime of constant scrutiny both state sanctioned and self imposed.'

This comes two days before Banksy painting of primates sitting in Britain's parliament is due to go under the hammer, expecting to fetch up to $2.5 million.

"Devolved Parliament", in which chimpanzees replace politicians, measures 13 feet (4 m) long, making it the largest known canvas by the secretive British street artist, according to Sotheby's.

Last year after another Banksy canvas, "Girl with Balloon", shredded itself in front of shocked onlookers at a Sotheby's auction just as it was sold.