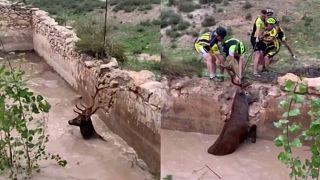 A group of cyclists in southern Spain banded together to rescue a deer that was trapped in the flooded ruins of a rural building near the city of Huesca.

A video clip that shows five cyclists pulling the deer by its antlers in a bid to set it free has collected 172,000 views on Facebook since it was uploaded on Friday.

The scene ends with the deer running away from its rescuers into nearby woodland.