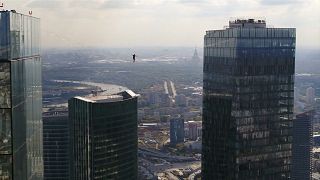 Moscow residents raised their heads and held their breaths as a team of adventurous enthusiasts walked on a tight rope between two of the city's tallest skyscrapers.

A group of skywalk masters from Russia, Germany, France and Canada carried out an audacious performance to mark 872 years since Moscow was founded.

They walked 245 metres at an altitude of 350 metres, beating the previous world record by around 100 metres.

Representatives of Guinness World Records said they need to do measurements before officially registering the record.