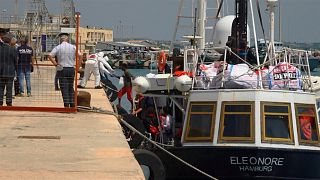 Italy's interior minister is vowing to make a charity boat with some 100 rescued migrants aboard pay dearly for docking in Sicily in defiance of a government ban.

Matteo Salvini, who leads the anti-migrant League party, tweeted the warning on Monday as the Eleonore entered Italian waters without permission and sailed toward a Sicilian port.

Mission-Lifeline captain Claus-Peter Reisch said bad weather forced him to bring the migrants to Pozzallo's port after being stranded eight days aboard by the outgoing populist government's crackdown on humanitarian rescue boats.

A video released by Markus Rinderspacher, the Bavarian state parliament vice-president, shows the tense exchange between the mission-Lifeline captain and the port authorities in Pozzallo.

Spurred by Salvini, the government issued a decree establishing million-euro (1.1 million US dollars) fines for captains of rescue boats which defy the ban on entering Italian waters or docking without permission.

Since authorities seized the Eleonore, it appeared they would let the migrants disembark.