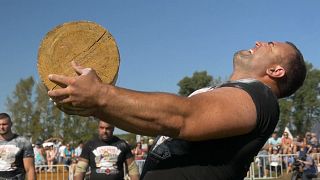 A game thought to date back to the 12th century featured at a showcase in Russia.

"Kila", a mixture of martial arts, boxing and wrestling with the aim of placing a heavy leather ball in your opponent's scoring zone, was played at Russia's Native Games over the weekend.

The wrestling element is particularly brutal as chokeholds, punching and fighting are all positively encouraged

The event took place in the Tambov region of Central Russia.