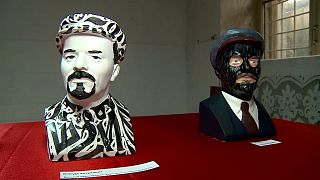 Now an exhibition in Russia shows how local artists are grappling with his legacy of political repression and mass killings.

In Russia, there are few faces better known than that of Vladimir Ilyich Ulyanov, or Lenin.

But for all that familiarity, few Russians have seen Lenin like this.

Here at this exhibition in Yekaterinburg, Lenin's face — once depicted throughout the former Soviet Union as part of a cult of personality — is being re-imagined.

The Lenin busts were first unveiled to the public on 15 August 2019.

They will now form part of the Museum of Soviet Life's permanent collection.