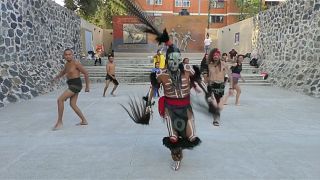 The ancient, pre-Hispanic game of "Pelota" has been brought back to life in Mexico City where dozens of enthusiasts gather each evening to practice.

The terrain they play on is the first court that has been constructed in the Mexican capital in modern times.

Mondays to Fridays at 6.00 pm, "Pelota" players congregate on a 40-by-5-metre court where they split into teams of five to pass a heavy ball made of natural rubber back and forth using only their hips.

The court is oriented east to west to mimic the movement of the sun and the game is accompanied by ceremonies that include the blowing of conch shells, drum playing, dancing, and the burning of incense and resin.

This modern version of the game is also known as "Ulama" and ball weight differs by group: 2.8kg for the men's game, 2.4kg for women, and 1.5kg for children.

The weight of the ball makes it common for players to head home after matches with bumps, bruises and sore spots. They wrap their hips and waists with cloth and suede to provide some protection.